Desert truffles, also known as criadillas or turmas de tierra, are a type of hypogeous fungus that grows in symbiosis with the roots of shrubs, usually of the genus Helianthemum. These fungi belong to the family Terfeziaceae, belonging to the ascomycetes group. Their appearance is similar to that of a traditional truffle, weighing between 30 and 300 grams and about 5 cm in diameter.
As can be guessed, these fungi grow in desert or very arid areas, and have been found both on the European continent, in the Mediterranean basin, and in various desert areas of Asia and Africa. They can occur in these places regardless of whether they are hot or cold deserts and regardless of the acidity and compactness of their sand, being able to grow even in coastal sands.
Despite the coincidence of name and appearance, the desert truffle has little to do with the traditional truffle, which belongs to the genus Tuber. Culinarily, those of the genus Tuber are consumed as a spice due to their great taste, and are very scarce. On the other hand, desert truffles are more abundant and their taste and aroma are similar to those of any edible mushroom.

The consumption of these truffles is mainly traditional and for their good taste, but they are quite interesting from a nutritional point of view as they have an important amount of proteins with essential amino acids and antioxidants, as well as minerals and fibre and omega 3 and 6 acids. This makes desert truffles a very interesting product nowadays, as the aim is to replace a large part of the proteins obtained from meat with proteins of fungal origin.

Traditionally these mushrooms have been harvested from the wild, but in recent years they have been domesticated and are now being cultivated. This type of cultivation is known as “thermiculture”. Desert truffles are usually symbionts with plants of the genus Helianthemum, but can also occur in symbiosis with other genera, such as Avena or Pinus. Although there are several species of these truffles, the most commonly used for cultivation is the species Terfezia claveryi, in symbiosis with Jarilla (Helianthemum almeriense). Achieving mycorrhization is quite complicated, as is producing a large-scale crop, but the positive aspect of this combination is that once implanted it regenerates continuously, as the seeds of the jarilla fall to the ground and become impregnated with the mycelium present in the soil, so that the mycorrhizae last. 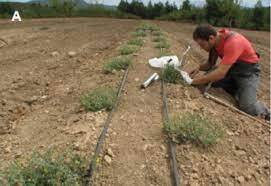 Production of this crop is annual. Once ripe and formed, the desert truffles form lumps on the surface of the soil, making them easy to see and harvest in spring, usually between February and May. The plantations become productive from the second spring after planting, increasing their productivity until the sixth or seventh year.
The compaction of the soil in which they grow will affect their shape. Those grown in fairly loose sandy soils have smoother, rounder shapes, while those grown in more compacted soils are quite irregular in shape with many lobes.
This cultivation is very simple and does not require any great technical knowledge. The only thing that needs to be done to make the plants grow well is to control weed growth, which is done by weeding or allowing sheep to graze the crop, as they do not eat the plant. In addition, over time, when the plant has developed well, it itself prevents weeds from growing, so this control would not be necessary. Therefore, the only tasks necessary in this crop are the marking and harvesting of the truffles during the spring.
Although it seems to be a very simple crop, this crop only needs about 200 litres of water per square metre per year, which is very little. The problem is that this water supply needs to take place specifically between autumn and winter. If there is no water supply at these times, the crop will need to be irrigated to obtain production.

The price of these truffles usually ranges from 20 to 60 € per kilogramme, although in some countries of the Persian Gulf, where they are highly valued, they can reach 220 € per kilogramme.
Although there are many species of desert truffle, only three species of the genus Terfezia grow in sufficient quantity to be marketable: T. arenaria, T. claveryi and T. fanfani. They produce approximately 400 kg of truffle per hectare in rainfed crops. Generally, the plantation starts to be productive from the second year onwards, but its productive peak is found six or seven years after planting. This high productivity, together with the low costs involved in its cultivation, make it a very profitable crop.
Another advantage for its commercialisation is that desert truffles can be perfectly preserved for four weeks refrigerated at 4 ºC, and can last up to six months in perfect condition if frozen at -18 ºC. 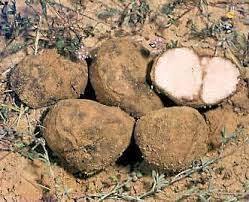 As these fungi do not need the soil to be hardly fertile, and live with very little water input, it is a great opportunity to revalue land with low rainfall or very poor soils. In addition, jarilla protects soils from erosion and, over time, provides them with organic matter, which improves their properties. This, together with the fact that there is no need to add fertilisers or pesticides, makes this crop highly sustainable and interesting for the environment, especially in the fight against desertification. In fact, it is considered as a good option to take as an adaptation to the changing climate, which is increasingly hotter and drier in several areas of the peninsula. In addition, the flowers of the jarilla are very attractive to bees and other pollinating insects, so their presence contributes to an increase in biodiversity and better pollination of other crops.

This site is registered on wpml.org as a development site.